The tea is brewing and a fresh batch of blueberry muffins just came out of the oven. My good friend Heather Peters has just stepped into the Spell Room and wants to dish about her adventures in Indie Publishing. Pull a chair up to the table and have a cup while Heather shares. (The butter will melt right into the muffin.)

I've been writing for nearly twenty years, as have most of you out there.  I began creating on my Commodore 64 (remember those dinosaurs?) in the late 80's, after devouring mostly historical romances.  After I began reading contemporary Harlequins, Silhouettes, etc., I knew I wanted to write my own love story with a HEA.
It took me nearly two years to finish my 60 thousand word contemporary novel. Now it was off to submit it to traditional publishers, mainly Harlequin. Of course, I was rejected, repeatedly. I became so discouraged that after a few years, I gave up and put my book on the shelf to gather dust, got myself a day job, and that was that.
Forward to 2006.  E-book publishing became so prevalent I couldn’t ignore the fact that my dust filled type written 210 page novel was languishing on my book shelf. I decided to clean it up and submit it as an e-book to a very reputable e-publisher. Success! They accepted it, and in 2010, Secret Dreams I signed a 7-year contract (a very bad decision on my part) and ignored my naiveté.  Hey, let's face it, I was assigned my own editor, received an awesome cover, and given a $100 advance. Happy did not describe my emotions at the time. I mistakenly thought that I was on my way to some big bucks.
Ah, no, not really.  To make a very long story short, my delusions of grandeur became reality shortly after. In nearly two years since the release of SD, I've never made back the $100 advance from this particular e-book pub, and although I have five other e-books out there, I've never been able to clear more than several dollars royalties on any of them.  After a few years and maybe enough royalties to buy myself a couple of 'treats', I've grown weary and very disillusioned by the traditional e-pubbing world. I haven't submitted to an e-publisher since 2010.
Forward again to June, 2012.  With rumors looming that the e-pub I submitted SD to was suffering from negative financial problems, I decided to write indie for the first time, and completed a two novella sports romance anthology, the first in a trilogy.
I had nothing to lose. So with the help of my critique partner and other friends, I learned how to download my book onto Amazon and Createspace, hired a cover artist, an editor and voila, I became an independent author!
I loved the fact that Amazon provided a bigger percentage of units sold and also, five free downloads within a 90-day span. My first free weekend, I received 3100 downloads and the week after that, I sold 82 books. I'm very proud of those numbers, and I am aiming to go even higher with each book I independently publish.
I've averaged sales of two books a day since June 30th. No, not a flood of sales, but I have to tell authors out there:  every second since I published Playing for Keeps/Body Check has been fun, enjoyable and totally, entirely worth it.  The cost of editing and a cover artist was under $200, and I've nearly made that back in 8 weeks.
I no longer have to surrender my work to anyone but myself.  I don’t have to worry if the traditional e-pub is going to survive or thrive. I was never happy with the editing of Secret Dreams, because I believe my editor and I had completely different ideas about my characters, but I went along with it, which I regret to this day.
To date, I've sold 130 indie books in exactly 2 months, compared to selling under 100 books in two years among three different traditional e-book publishers (with virtually pennies in royalties).
Suffice to say, I'm having fun, and don’t have to worry about failing traditional e-pubs.  I love to  promote/cross promote/share my books with other wonderful authors out there, receive invaluable advice from friends on how to make indie pubbing a success, and  have joined wonderful groups/blogs where the members help get their books out there to the masses.
Indie publishing IS the future, and I'd like to add a post script regarding the traditional pub that published Secret Dreams, Surrender and Best  Laid Plans:  I have requested my rights back with multiple,  requests, to no avail.  Now, my work will be held hostage while I wait another five years to retain my rights.  Deciding to self publish has been the best decision I've ever made.
If anyone would like to contact me, and talk about indie publishing, I'd love to share thoughts.
Heatherpetersauthor@yahoo.com
My website:  www.heatherpetersauthor.vpweb.com
Facebook:  Heather Peters
Blog:  www.bodaciousbabesbookbuds.blogspot.com

Hi! It's Liberty, again. Heather was too shy to mention but Book 2 in her Sports Series is due to be released this fall. Here is a sneak preview of her new cover designed by  http://stanzalonedesign.weebly.com/book-covers.html
be sure to keep an eye out for it. 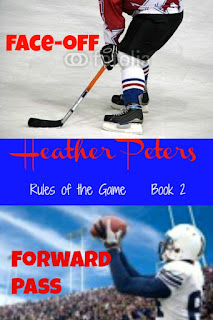