Last July, right be before I headed out to Nationals I did the thing I had wanted to do for decades--I dyed my hair purple. Not all of it, just underneath the back. Where it could be hidden if I didn't like it. (Small chance of that, but I listened to my adviser.) Since my hair is waist length, that is still quite a bit of purple hair.

The purple was still in my hair (the color stayed nicely) a few weeks ago when I decided to refresh the color. Now it is so bright it glows in the sun!

Yesterday I had a business meeting I drove to in an unairconditioned car. I had pulled my hair into a high pony to avoid knotting and being blinded by it when it blew in my face because I had to drive with all the windows open, listening to NPR.

The traffic on 95 was a tad unpleasant until a car with three men rushed up beside me, and one of the guys yelled out his window, "I love your hair!"

I have reached the age where an unsolicited compliment can make my day, even if it could be classified as a cat call.

I switched the radio to an "oldies" channel and the first song I heard was Mellencamp singing "Hurts So Good." Needless to say I started rocking out in the car and played drum on the roof while drivers played cat and mouse with openings in the road.

I am not a sedate woman, as any of my children will tell you. In fact, I can sometimes be downright embarrassing. (Think Auntie Mame!)

Last week my daughter Amanda Torrey dubbed me Nannylicious, much to the distress of my teenage grandsons. But you know what? I like it.

And so I enter the next stage of my life as Nannylicious.

I am pleased to announce The Designer Bride, book five in the Boundless Billionaire series, will be released in July!!! 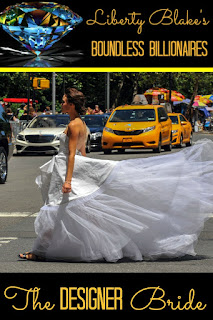