Liv Rancourt is visiting the Spell Room today to talk about Vampires and Reality.

Tagline for A Vampire's Deadly Delight:

An ordinary bookstore owner and a gorgeous instrument of vampire destruction share a secret that could kill them both. What will each of them give, and give up, to survive?

Reality Bites
Last weekend was terribly exciting because it marked the release of my first book, A Vampire’s Deadly Delight. I’m lucky to have kind and supportive friends like who are gracious enough to give me space on their blog to talk about my new book. Thanks, ! You’ve been very patient with me and I appreciate it.
As you can tell from the title, there’s at least one vampire in my book. In fact, there are several, but before I wrote it I did surprisingly little research about vampires. I didn’t really need to. These days you’d have to be a doorknob not to know a little something about the undead. They’re all over the place, a crazy collage of soulless blood drinkers ready to entertain us.
It may sound like putting the caboose at the front of the train, but I did the research after the book came out, so that when I have the opportunity to write a blog post, I’d know what I was talking about. I’ve learned that there are some fascinating and informative websites out there in internet-land, covering every possible aspect of paranormal life. It’s really kind of awesome. And I learned that there are websites dedicated to “real” vampires.  There’s a whole subculture where, in one way or another, people identify themselves as vampires.
It’s enough to give a (living) body chills.
I’ve always been a fan of Lestat and Louise, of Don Ysidro, and of ol’ Count Dracula himself*. They’re some of my favorite characters. (*That’s Interview with a Vampire by Ann Rice, Those Who Hunt The Night by Barbara Hambly, and Dracula by Bram Stoker). More recently I’ve been a loyal reader of any number of vampire series, and I lived with vamps for quite some time while writing Deadly Delight, but never once, in all that time, did I think that I might actually BE a vampire. With all due respect, people, I think maybe you need to get out more. In the sunshine. In clothing that’s not black and cobwebby.
I thought about including some of these “real” vampire website addresses to support my claim, but I didn’t want to make anybody mad, so you’ll have to do your own research. I found a site that describes the genetic mutations that are required to create a vampire, and another that describes itself as a vampire support center. And nowhere did either of those sites indicate that they realized they were writing fiction.
In the end, I guess it’s a harmless enough pastime, no crazier than refighting Civil War battles or, say, deciding to write your first book at the age of 49 (ooh, guilty as charged!). As long as there’s no real exchange of bodily fluids and everyone goes home happy, it’s okay. I guess. I just prefer that my fictional characters stay on the page or on the screen, and not lurking in the darkened corners of my basement.
Peace,
Liv

She’s a quiet, unassuming bookstore owner by day, but by night...

Kristen has a deadly secret—when she smells a vampire, she turns into Jai, a beauti-licious babe who makes vampspermanently dead. To a vamp, Jai is like ambrosia. They can’t resist her. She uses this attraction, plus her super strength and her trusty blade, Mr. Sticky, to end their undead lives. The thrill of wearing miniskirts without worrying about cellulite stifles any qualms Kristen might have about killing the undead. Being Jai is the most fun she has ever had—until they come up against the one vampire Jai can’t kill. If he and Jai have a history, as he claims, Jai can’t remember it...or him.

But when her work catches the attention of some old enemies—who won’t hesitate to destroy Kristen if it also means the end of Jai—this vampire may be their only hope. Can Kristen and Jai learn to tell the difference between good and evil in time to defeat Jai’s ancient nemesis? Or will being Jai’s hostess cost Kristen more than just her beauty sleep?

Liv Rancourt is a writer of speculative fiction and romance. She lives in with her husband, two teenagers, two cats and one wayward puppy. Writing stories that have happy endings is a good way to balance her work in the neonatal intensive care unit, and she is thrilled to be publishing her first novella with Black Opal Books. Liv can be found on-line at her website (www.livrancourt.com), her blog (www.liv-rancourt.blogspot.com), on Facebook (www.facebook.com/liv.rancourt), or on Twitter (www.twitter.com/LivRancourt). 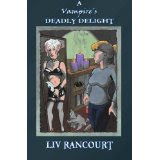